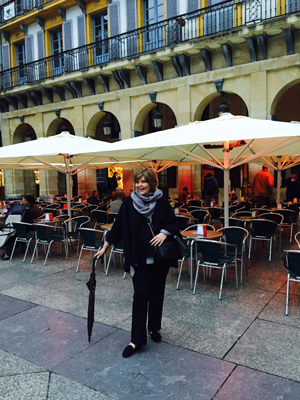 It was my Greek father, who taught me my love of the Mediterranean and Europe. Over the past 35 years I have had the opportunity to travel throughout Europe, South East Asia and many many more destinations. I have grown my business with clients from coast to coast, by providing the highest level of personalized service and expertise. I would love to offer you this same high level of service.

Joan is the absolute best!  Trip planning is always overwhelming for me…so Joan always comes to the rescue!  She is terrific at listening to what we want/ don’t want and helping us find some places we didn’t even know we wanted!  Highly recommended and will use her in the future for all our travel needs!

My wife and I traveled to Italy on our honeymoon in late April/early May of 2017. I worked with Joan in the months preceding our trip and have nothing but great things to say. She was incredibly attentive to our needs and helped make the process as smooth as possible. After a number of discussions about our personal style and the types of activities we enjoy, Joan put together an incredible itinerary with all of the things that we enjoy.

Every hotel we stayed at was incredible and many included no additional charge upgrades because we were clients of the travel agency. During our two weeks of travel we stayed in six different locations which meant a lot of transfers in a country where we didn’t speak the language. Every one of them went smoothly and was detailed in our travel itineraries, this included boats and automobiles. Every detail was laid out for us in advance and there was zero stress.

I would, without hesitation, recommend the Lake Shore Travel group and Joan Schwartz in particular. Our honeymoon was the trip of a lifetime and on it we created memories that we will treasure for the rest of ours.

Thank you so much for making our Italy trip so incredible. Your time spent learning about us and what we enjoy in a vacation resulted in your being spot on with recommendations from hotels and tours to dining. Your recommendation for dinner at La Vin Osteria was the best dinner we had in Italy.

You should use Joan as much as possible. She gets me free room upgrades and breakfasts almost every time plus spa credits and welcome baskets and other stuff. She also knows a ton of things you would never discover without being a travel agent for 30 years. Iâ€™ve used her literally all my adult life and my parents used her when I was a kid. More importantly she can save you hours of time.

In this time of using web sites to find the best fare, no one can replace Joan. She has rescued me on many occasions, something web sites cannot do. She has been my agent for almost 25 years; I would be lost with Joan.

What can I say beyond Thank You! The trip was spectacular! Way exceeded whatever our expectations might have been. Canâ€™t thank you enough for what I know was more work than you bargained for. Leo and our driver Johnny were perfect as well. Would recommend you and them without reservation. You and they were great!

I just returned from a wonderful trip to Spain’s Rioja Region also including the Costa Brava. We visited San Sebastian, Bilbao, Girona and many other delightful cities. Each was unique and beautiful with much to offer.

Bilbao of course has the Guggenheim where I am pictured behind the Tulip Sculpture but also much more.

The area between San Sebastian and Bilbao is excellent for trekking and biking and has mountains, beaches and rivers. The town of Zarutz is well-known for surfing. From almost anywhere one can drive to Santiago de Compostella, the route of the Pilgrims.

The food in this region (Basque Region) cannot be described. Amazing Michelin star restaurants but with a casual feel. Great opportunities for cooking classes. In Gerona, I had the chance to cook an amazing Spanish dish with chef Jordi Dalmau at Espai Bulthaup. Jordi Dalmau has worked with renowned chefs like Carme Ruscalleda (3* Michelin) and Santi Santamaria. What a great activity! We ate the end result and I can tell you it was FANTASTIC!

We visited the Balenciaga Museum where a series of costumes and designs show off the career of the brilliant Spanish couturier, CristÃ³bal Balenciaga, who was born in Getaria. This is the first museum in the world dedicated exclusively to a designer and it is housed in a building adjoining the Aldamar Palace, where Balenciaga began his career. The permanent exhibition includes a selection of 90 items including Queen Fabiola of Belgium’s wedding dress and the dresses designed for the Princess of Monaco, Grace Kelly. I had no idea and it is worth the stop for anyone!

My highlight meal of the trip was at Restaurante Etxanobe. Etxanobe is another way of understanding “Art of Food”, thanks to Fernando Canales (Chef-Owner). The location in the new part of Bilbao.

We spent two nights in this area and explored Rioja wine country and San Sebastian. The views are unbeatable and we visited the Guggenheim Museum. We learned how to make pinxos (pronounced pincho). In the rest of Spain they are called tapas. What a fun event!

Our wine education began with the process of wine making underground, the old way and progressed to the most modern Cava (Champagne) making process. What an education!

One hotel was closed for the season but opened just for us for two nights. Hostal de la Gavina on the Costa Brava was lovely, charming old style property on the beach. The staff was amazing too!

While here we had an afternoon workshop with Evarist March, gastro-botanical consultant to El Celler de Can Roca Restaurant and director of Naturalwalks. During the activity the group will learn about the fascinating world of Catalonia’s wild mushrooms and herbs and their uses. This was a real highlight, the taste, aromas and touch along with sight were all included in this special afternoon in the forest! This would be great for anyone young or old!

We ended in Barcelona. What can one say about Barcelona? Food, fashion, fun. It doesn’t get much better!

In November 2016, I sailed on Uniworldâ€™s S.S Catherine from Burgundy to Provence. What a spectacular week we had! The ship was beautifully appointed complete with heated marble floors and towel rack in bathroom. Dining was a daily gourmet experience and the best wines of the region flowed freely â€“ included along with any high-end spirits one might desire. The shore excursions, also included, were wonderful, and educational. Wine tasting was also a treat. Never have I experienced service like this â€“ what a staff!

Uniworld is a totally all-inclusive experience. Even gratuities on the ship and on shore are included. In 2017, a new ship, the Joire de Vivre will begin sailing from Paris to Normandy and back, it sounds fabulous!

I spent 10 days in Italy exploring the Amafli Coast, Positano, Capri and the Island of Ischia. What can one say about the Amalfi Coast that hasnâ€™t already been said â€“ itâ€™s heaven on earth! No place is like Positano! The Il San Pietro Hotel is perfection â€“ no other words – perfection.

Ischia was new to me and a delightful surprise for anyone looking for an escape to a delightful, charming, untouched island with a beautiful sandy beach! Not the norm in Europe where beaches are usually hard sand with pebbles.

What could be better than a relaxing stay at the Four Seasons Nevis? I just returned completed rejuvenated.

The resort is located on Pinneys beach on the small, unspoiled island of Nevis Â – minutes from museums, plantation homes and historic churches dating to the 1600s; 10 minutes from the Nevis airport, or 30 minutes by boat from the St. Kitts airport.

We shared the beautiful, challenging Robert Trent Jones golf course with monkeys and donkeys â€“ TRUTHFULLY!Â  It was the best experience!

Wonderful restaurants on the island, as well as at the resort â€“ sound good, it was!

Recently I spent a few glorious days at the Ritz Carlton Dorado Beach in Puerto Rico.

Itâ€™s a stunning property with the most unique spa I have ever seen.Â  The minute one enters Spa Botanicoâ€™s Apothecary Portal filled with local botanicals used in the treatments the fragrances overtake the senses and relaxation begins. This magical room is a museum for the senses. There is even a treatment room in a tree!

The accommodations are marvelousâ€“simply beautiful and very well-appointed! Â A great get away with non-stop flights from Chicago.